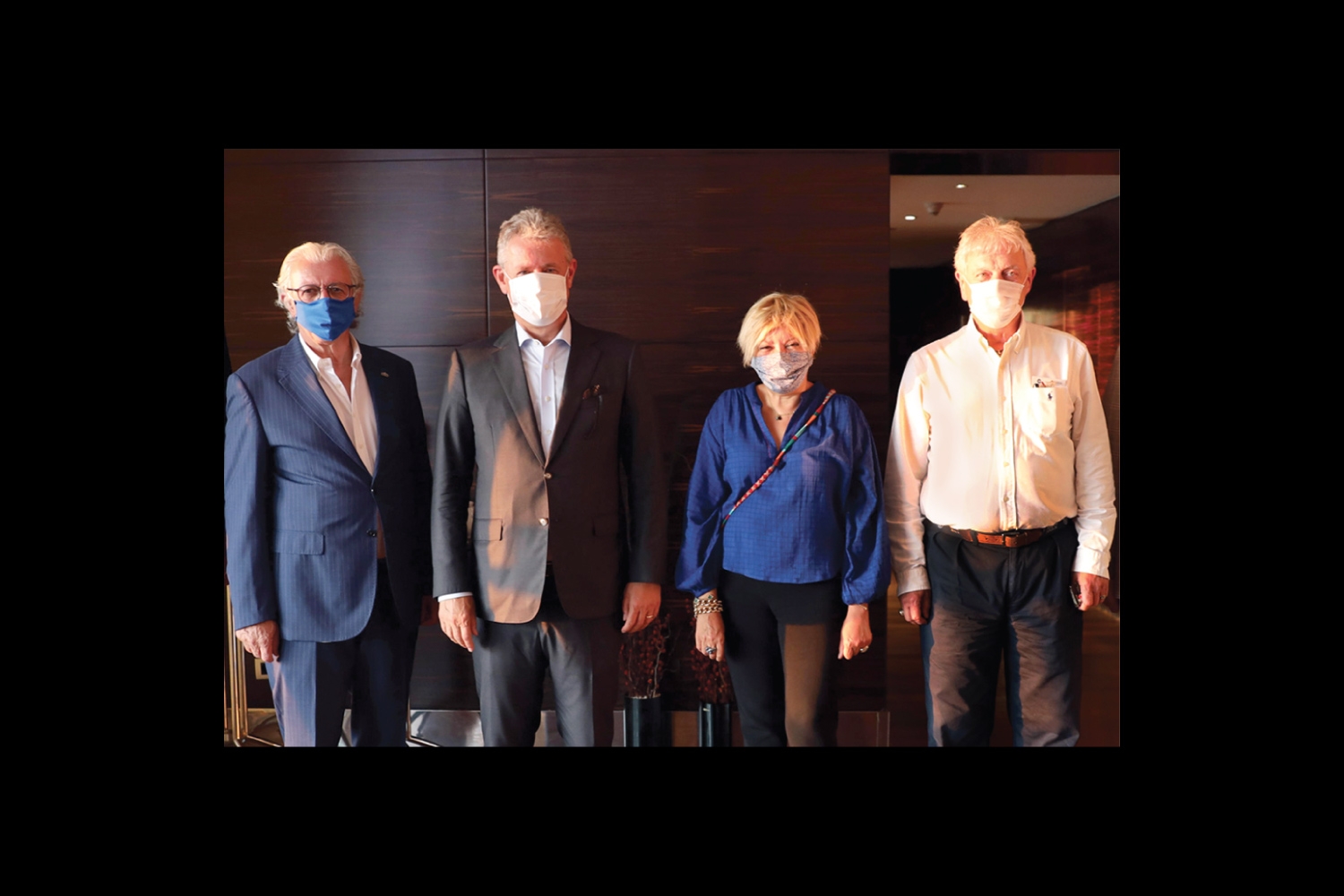 Izmir University of Economics (IUE), celebrating its 20th anniversary this year as the first Foundation University of the Aegean Region, brought together the presidents of 3 non-governmental organizations that play a key role in the development of the city and direct the regional economy for "education". Ender Yorgancılar, President of Aegean Region Chamber of Industry (EBSO), Işınsu Kestelli, President of Izmir Commodity Exchange (ITB), and Jak Eskinazi, Coordinator President of Aegean Exporters' Associations (EIB), were elected to the board of trustees of IUE. IUE, of which Izmir Chamber of Commerce (IZTO) Chairman Mahmut Özgener is also the president of the board of trustees, created a coalition for education by implementing a model that will set an example for Turkey.

The president and the 29-member board of trustees, who came together under the roof of Izmir University of Economics (IUE), will create the roadmap of the projects planned for students. The delegation, which will direct the studies that will cover not only IUE but also Izmir in general; will also play an active role in issues such as young people from different provinces of Turkey choosing Izmir, increasing employment opportunities for university graduates, and improving scholarship opportunities. IUE, which is also the creator of the Campus Izmir concept, the first model of university-city integration in Turkey, will become one of the most important education bases of the Aegean Region.

Mahmut Özgener, President of IUE Board of Trustees, stated that they have realized an exemplary integration that will benefit all universities in Izmir. President Özgener said, “We have accomplished very successful projects in a short time with the friends we work with on the board of trustees of our university. We would like to thank all members of the board of trustees who have played a role and contributed to the success of our university so far. Acting with a shared enthusiasm for our city and youth, we have made IUE, the pioneer of firsts, one of the leading universities in Turkey, chosen by the leading students who are at the top of the ranking. However, universities can never see the point they reach as their point of destination. They always focus on the future and work hard to achieve the best. As a university with Izmir in its genes and nourished by the power and potential of the city, we acted upon these thoughts. We have further enlarged the unity of power within ourselves, and brought 3 presidents, who made important contributions to our city, into our family.”

President Özgener continued as follows: “Representatives of Izmir's largest non-governmental organizations will now work together for our city and youth. We cooperate with sister organizations in many important projects in the field of agriculture, trade, and industry for our city. We have consolidated this with education. I believe that this synergy we have created within IUE will envelop Izmir in a short time. While we took this step, we set a goal of working for all students in Izmir. We focused on bringing young people together more often, creating new opportunities for them, and making the demands of our students a reality. This formation, which we started in Izmir, will yield very positive results. It will bring Izmir closer to its vision of a 'youth friendly, strong city'. We will jointly raise young people who have the qualifications Turkey needs, who take science and reason as their reference, who have high self-confidence, who are modern like our city and who look to the future with hope.”

EBSO President Ender Yorgancılar said that the partnership culture formed in Izmir paved the way for the formation of new projects and collaborations that will carry the city to the future. “Not the ones speaking the same language, but the ones sharing the same feeling succeed. As the representatives of the Izmir business world, we ensured the integrity of discourse, unity of thought, and bonding. Working together on the board of trustees of IUE is a great opportunity to take the work done so far for our young people one step further. I consider being on the board of trustees from this perspective and attach great importance to it. I would like to thank Mahmut Özgener for his offer. The greatest potential we have for the development of our country and city is today's youth. The best investment to be made for the future of our country is to take decisive steps that will pave the way for young people. These ideals are the basis of the understanding that brings us together and creates a common excitement in all of us at Izmir University of Economics,” said President Yorgancılar.

ITB President Işınsu Kestelli stated that an innovative world where the future is in technology awaits us, and that catching this can only be possible with the mind, science, innovation, and the ideas of the young people. President Kestelli said, “We will be able to advance in science and technology by providing the young population with analytical and critical thinking skills and improving their problem-solving skills. To change and transform, we need to meet the talent deficit. Accordingly, it is critical for business, public and non-governmental organizations to work more closely with universities to produce solutions tailored to their needs.”

Kestelli continued as follows: “I am very excited to develop projects that will develop our country, region and city with Izmir University of Economics, which has initiated a brand-new model for university-civil society cooperation, like many firsts and innovations it has implemented since its establishment. I sincerely believe that we will undertake projects that will go beyond the times and add value to our city, thanks to the unity of power we have achieved with Izmir University of Economics and all the presidents in the board of trustees. I am proud to work for young people with high energy and entrepreneurial spirit, for our city, for the future we deserve.”

IZMIR'S MOST IMPORTANT 'THINK TANK' HAS BEEN FORMED

EIB Coordinator President Jak Eskinazi pointed out that the union of forces that the institutions representing the business world in Izmir have achieved in recent years brought in organizaitons such as Dikili Agriculture Specialized Organized Industrial Zone, Izmir Entrepreneurship and Innovation Center (IZQ), Birlikten İzmir Doğar Campaign, Furniture Organized Industrial Zone, Kemalpaşa Logistics Village, Software and Informatics Cluster Association (YABISAK). President Eskinazi noted that the presidents of IZTO, EBSO, ITB and EIB will work together on the board of trustees and will create a think tank where new projects will emerge that will make Izmir the star of the Mediterranean.

Pointing out that Turkey needs to get rid of the middle-income trap it has fallen into, President Eskinazi said, “We see that countries that escaped the middle-income trap invest in education, raise well-educated generations, and succeed in producing and exporting with added value. It is clear what we must do. First, we will carry our education system to world standards, we will educate students with an environmentalist and sustainability-oriented approach. Afterwards, we will focus on the production of value-added products that meet the expectations of the world. This way, we will reach our target of a country with a foreign trade surplus. Izmir University of Economics will guide Turkey in its journey to foreign trade surplus.”