Special almanac for the 100th anniversary of the Republic 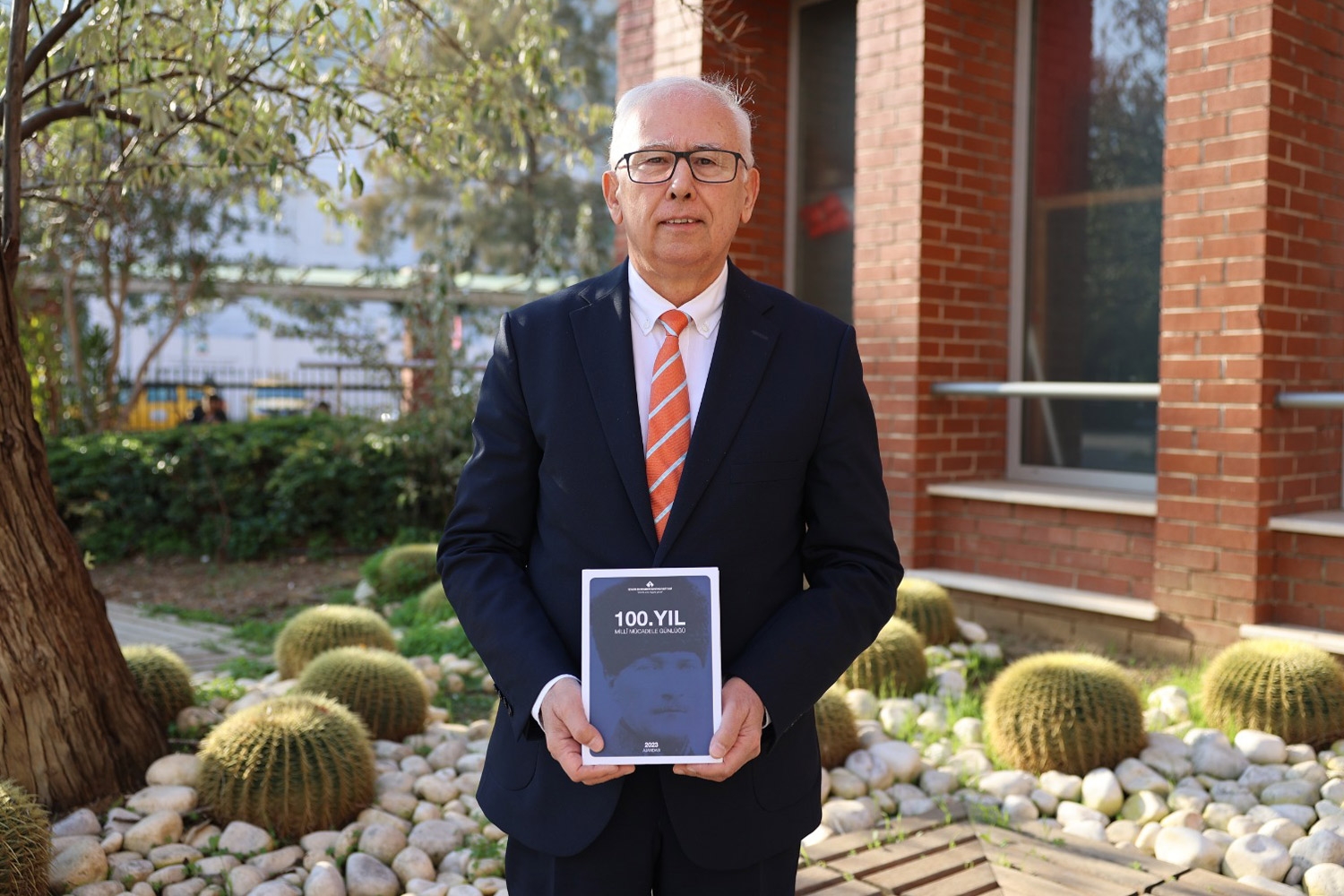 Izmir University of Economics (IUE) carried the ‘Journal of the National Struggle’ project, which it started in 2018, to the centennial of the Republic, to shed light on recent history by depicting the National Struggle day by day with photographs and documents. IUE, which prepared a special almanac for 2023 within the scope of the project, determined 12 themes that reflect the basic philosophy and values ​​of the Republic, and included the historical words of Ghazi Mustafa Kemal Ataturk on these in the almanac. Ataturk's words reflecting the founding vision of the Republic, as well as many photographs and evaluations of academics from different universities were included in the archive-like almanac.

Izmir University of Economics started its project, which depicts the ‘National Struggle’ process that was crowned with the Republic, exactly 100 years after with Ataturk’s famous quote ‘As they have come, so they will go’ on 13 November 1918. Sharing all the developments between 13 November 1918 and 29 October 1923 with tens of thousands of people through seminars, meetings, exhibitions and social media, IUE has benefited from the archives of the Presidency and the General Staff.

Within the scope of the ‘Journal of the National Struggle’ project, an almanac was also prepared at the end of each year, and all the information and special photographs obtained were thus shared with a large number of people. IUE has further developed the project, which sheds light on a century ago, with a new almanac specially prepared for the centennial of the Republic. 12 themes, ‘National Economy’, ‘State and Political Ethics’, ‘Turkish Women’, ‘Justice and Law’, ‘National Independence’, ‘National Sovereignty and Democracy’, ‘National Education’, ‘Life’, ‘Science and Rationalism’, ‘Youth and Sports’, ‘National Defense’, ‘Culture and Civilization’, reflecting the basic values ​​of the Republic were determined in the almanac.

The historical statements made by the Great Leader Mustafa Kemal Ataturk on these themes were also included in the almanac along with the photographs. 12 academics from different universities also supported the project coordinated by Asst. Prof. Dr. Elçin Yılmaz, Head of IUE Common Courses Department and Coordinator of Atatürk's Principles and Revolution History Courses, and made evaluations about the foundation year of the Republic.

IUE Rector Prof. Dr. Murat Aşkar said that they attach great importance to the project in terms of explaining to the youth that the Republic has been achieved as a result of great sacrifice and struggle. Prof. Dr. Aşkar said, “The purpose of the Journal of the National Struggle Project was to remind youth of the Turkish nation's struggle for independence, by reminding the events and developments that took place 100 years ago, and the difficulties in conquering these lands we live in. We have done this through many channels, from social media posts to website content. We put the outputs of this project on the almanac at the end of each year and shared it with many people. Every time people looked at the almanac, they read the information about the historical developments that took place 100 years ago and looked at the photographs. This year's almanac, on the other hand, was created with a different concept specifically for the centennial of our Republic.”

STORY of LIBERATION and FOUNDING

Sharing information about the almanac, Prof. Dr. Aşkar continued as follows: “We told the story of the Republic of Turkey, which was founded under the leadership of Mustafa Kemal Ataturk, attaining its national, democratic, secular, modern and fully independent structure and taking its place among the civilized states, in the almanac. We have identified 12 basic themes that reflect the basic values ​​and philosophy of the Republic and have formed the almanac in line with these themes. In the previous almanacs, there was a day-to-day transfer of information. This time, we wanted to convey the historical developments and the founding philosophy on the themes we determined. Esteemed academics, both from our university and from other universities, also acted with us. It turned out to be a very nice work. We explained the industrial move started in 1923, the first factories, the first sports clubs, the national matches, and the official liberation of Istanbul from the enemy occupation on October 6, 1923, the preparations for Ataturk's revolutions and the proclamation of the Republic on October 29, 1923.”

THEY SHARED THEIR ARCHIVES WITH US

Reminding that many institutions supported them in the preparation of the Journal of National Struggle project, Aşkar said, “I would like to thank the Presidency, Ministry of National Defense Archive and Military History Department, Ataturk Research Center, Ahmet Piriştina City Archive and Museum (APIKAM) for sharing their archives with us. As Izmir University of Economics, we will be aiming for young people to better understand and assimilate the National Struggle and our recent history with the activities we will organize in the centennial of the Republic. May 2023 be a year full of health, happiness and success. I would like to take this opportunity to celebrate the centennial anniversary of our republic in advance, and commemorate all our martyrs, especially Great Leader Mustafa Kemal Ataturk, with mercy and gratitude.” 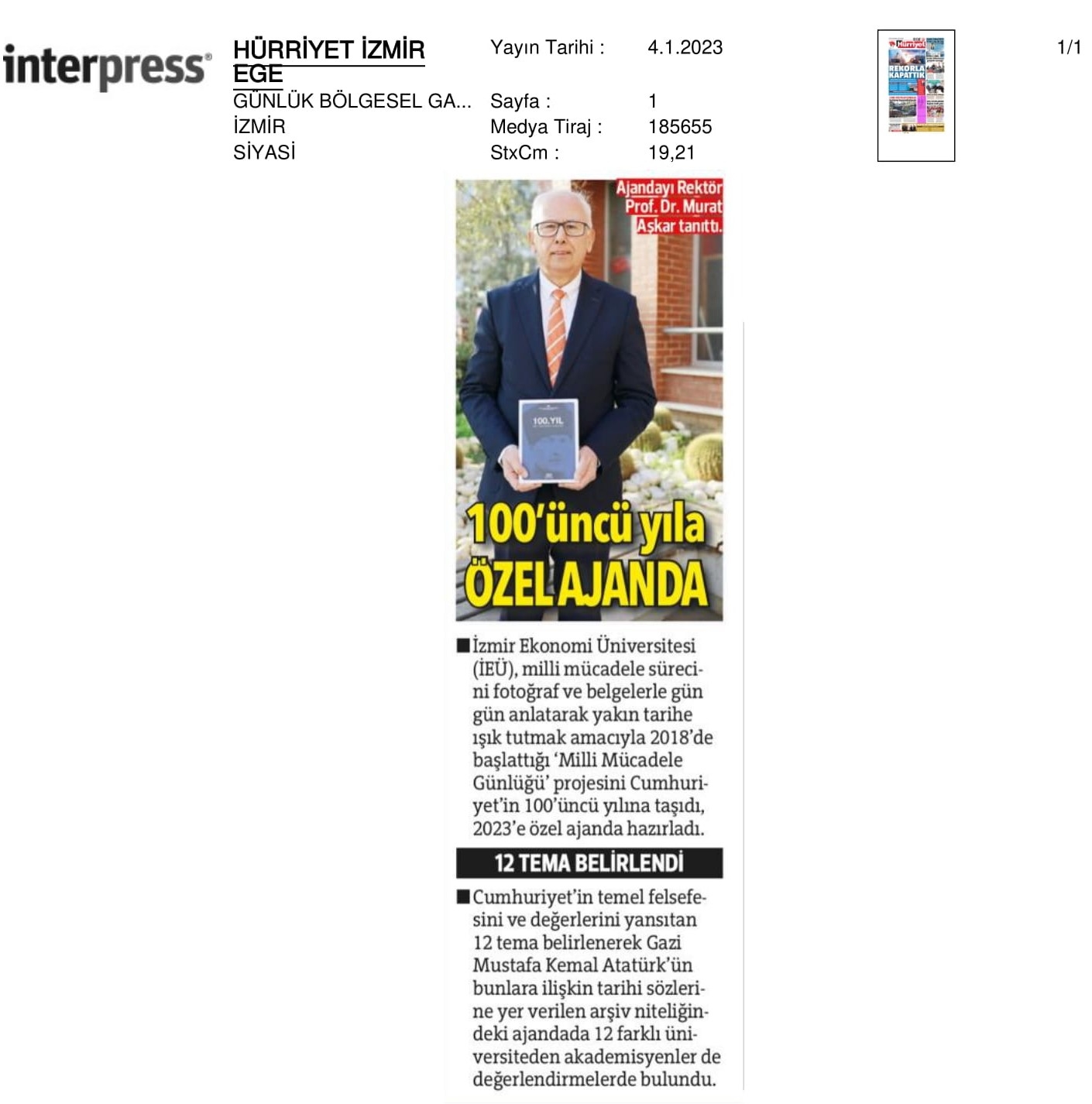 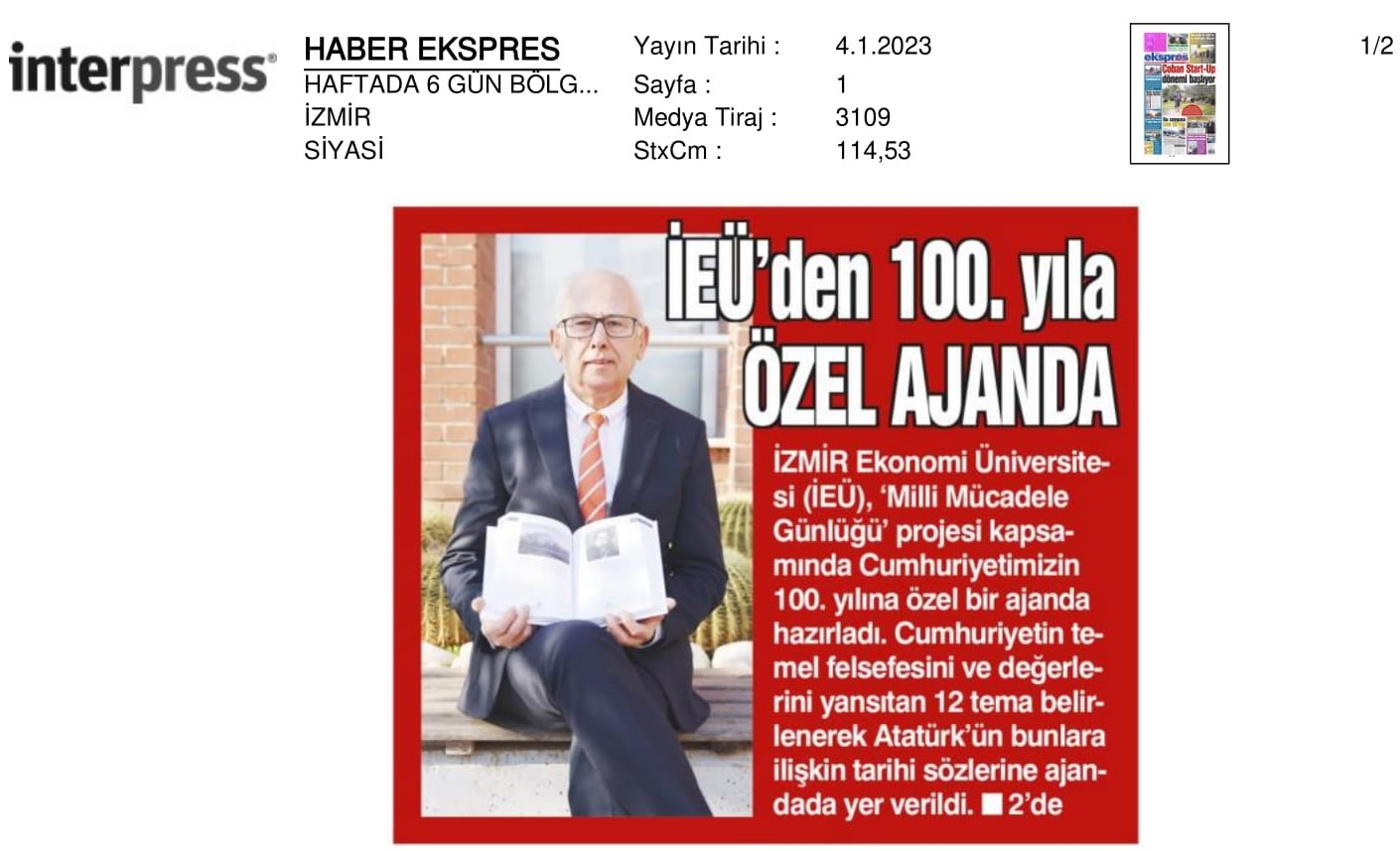 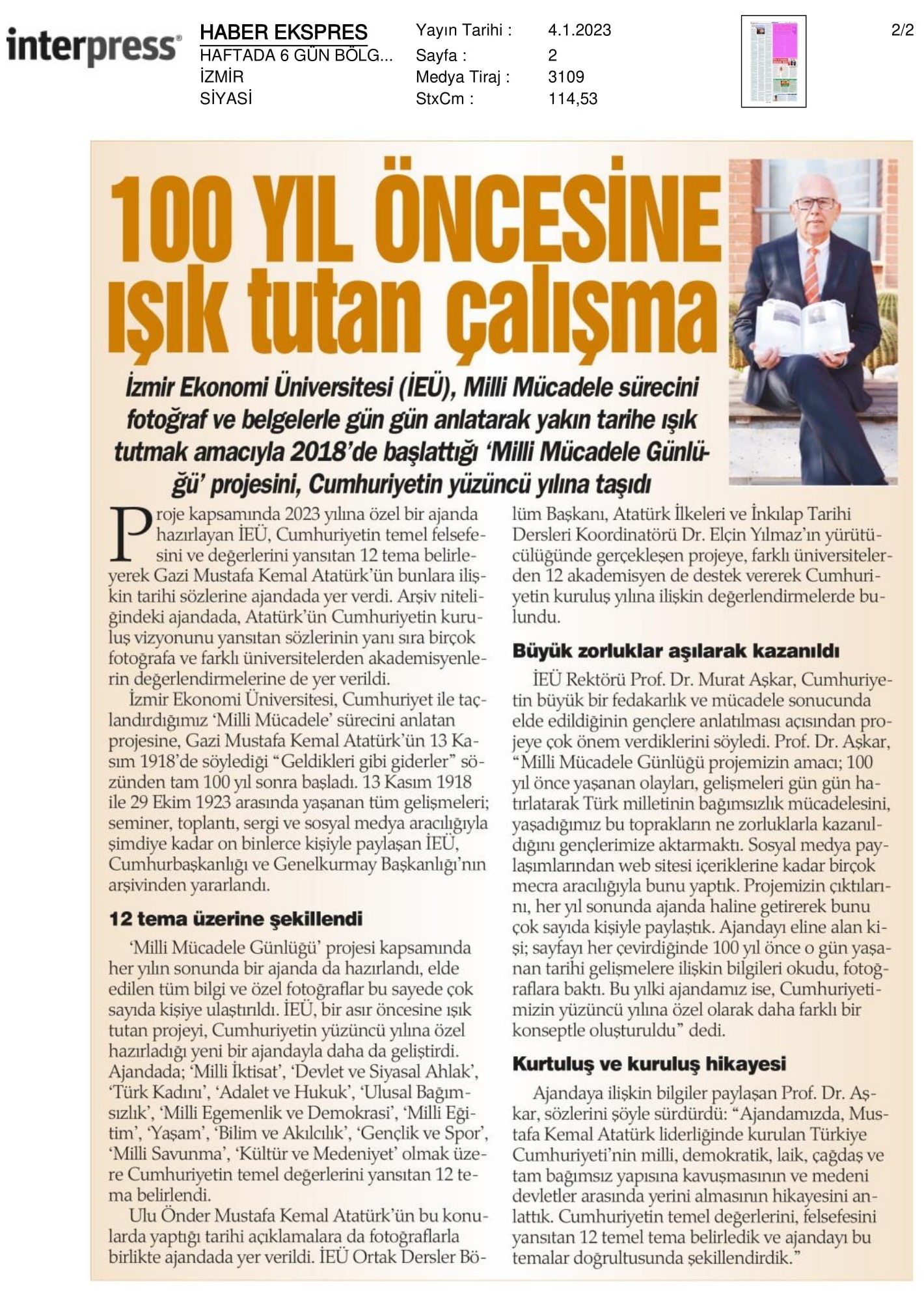 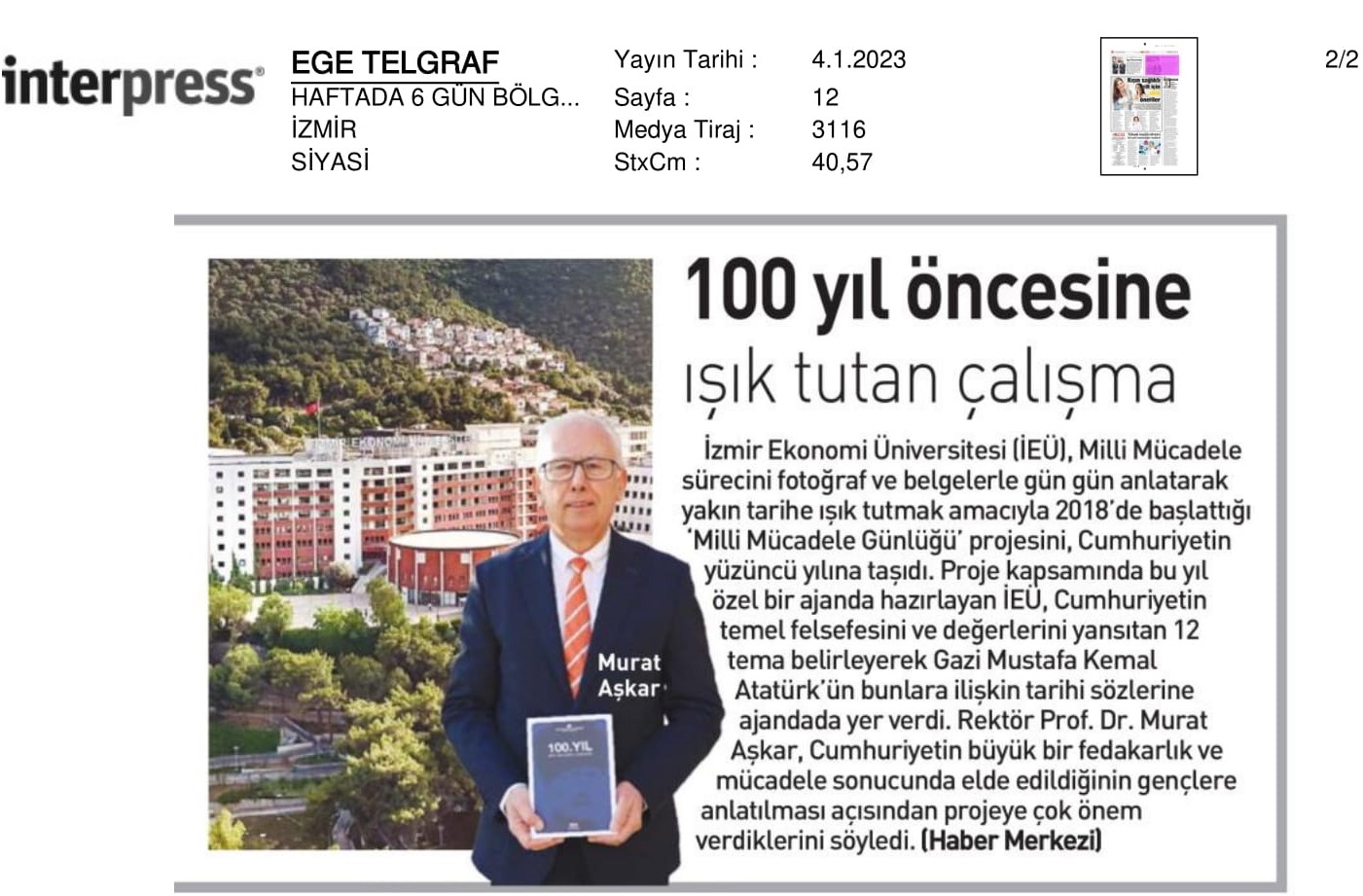 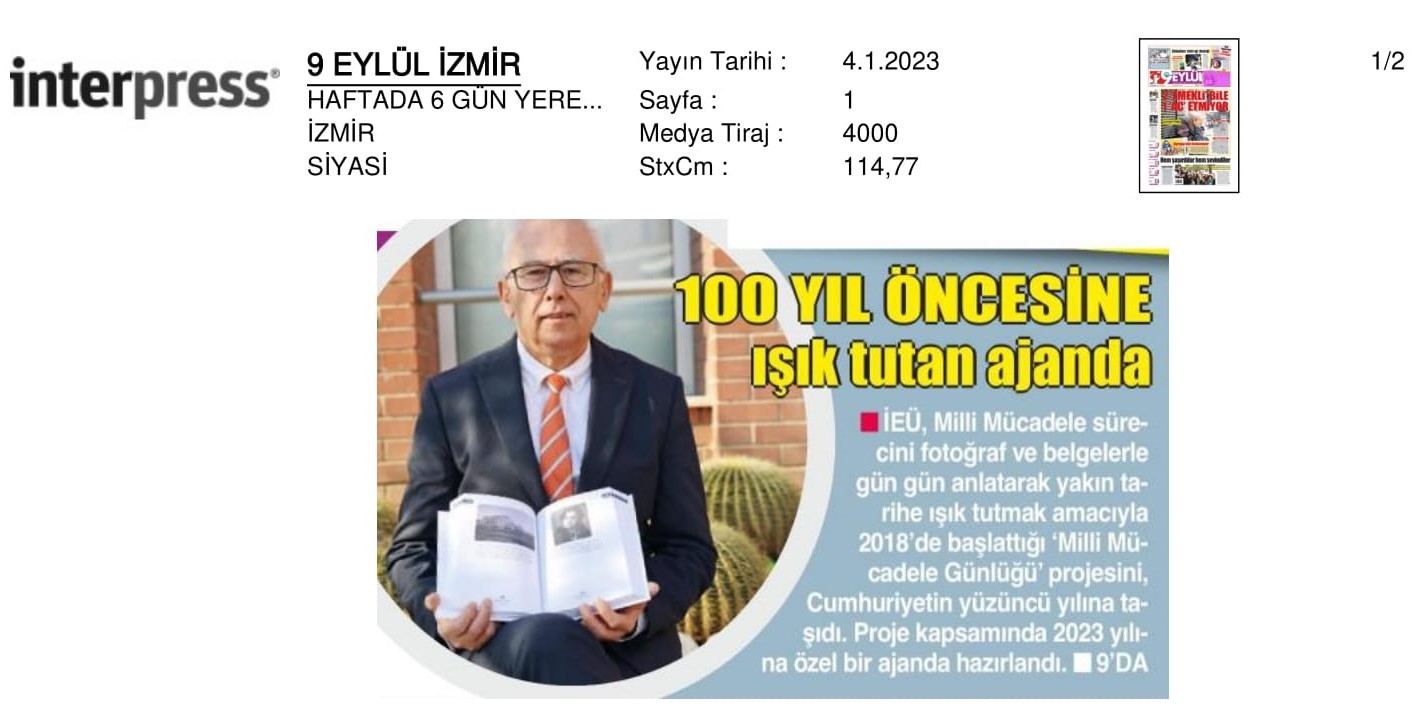 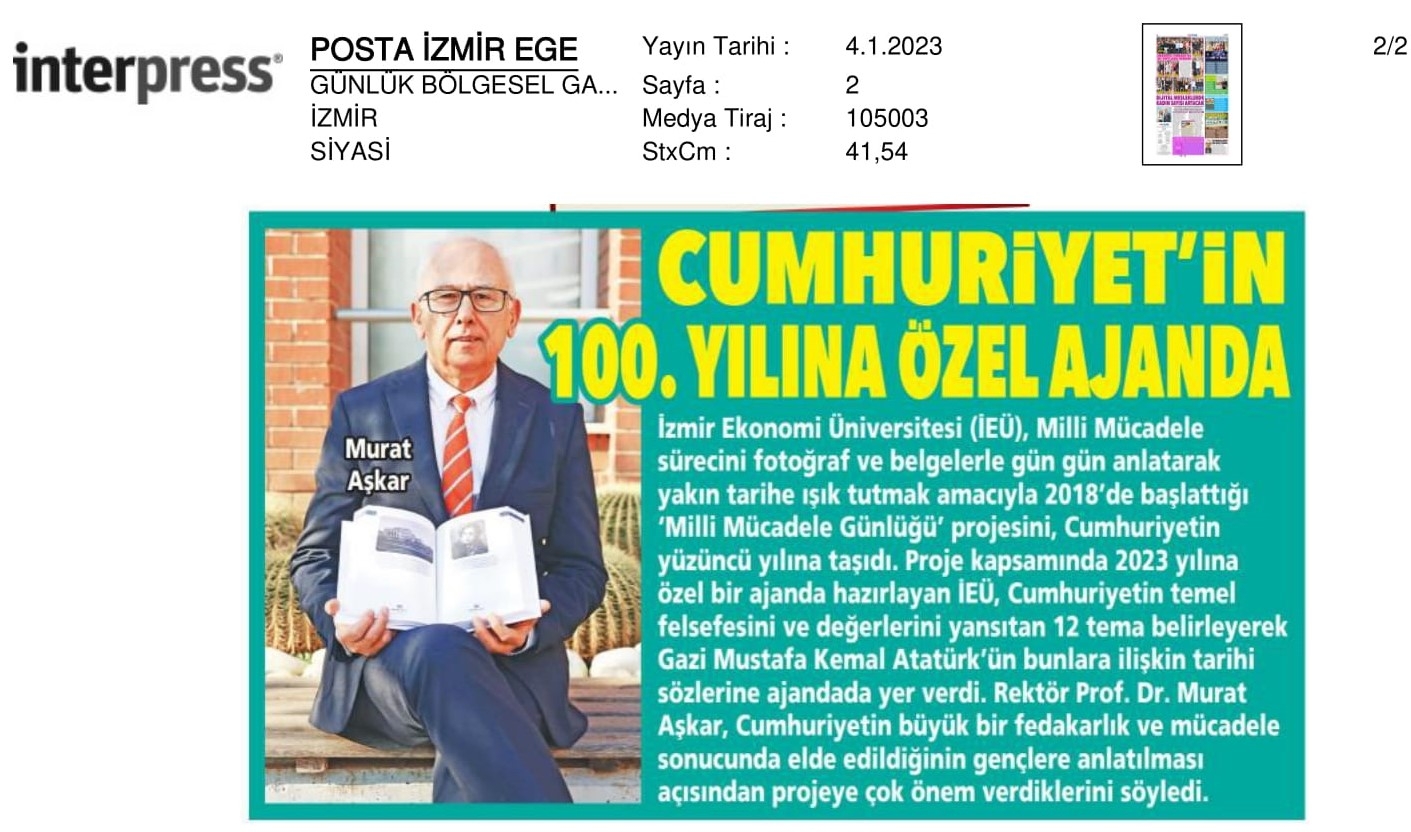 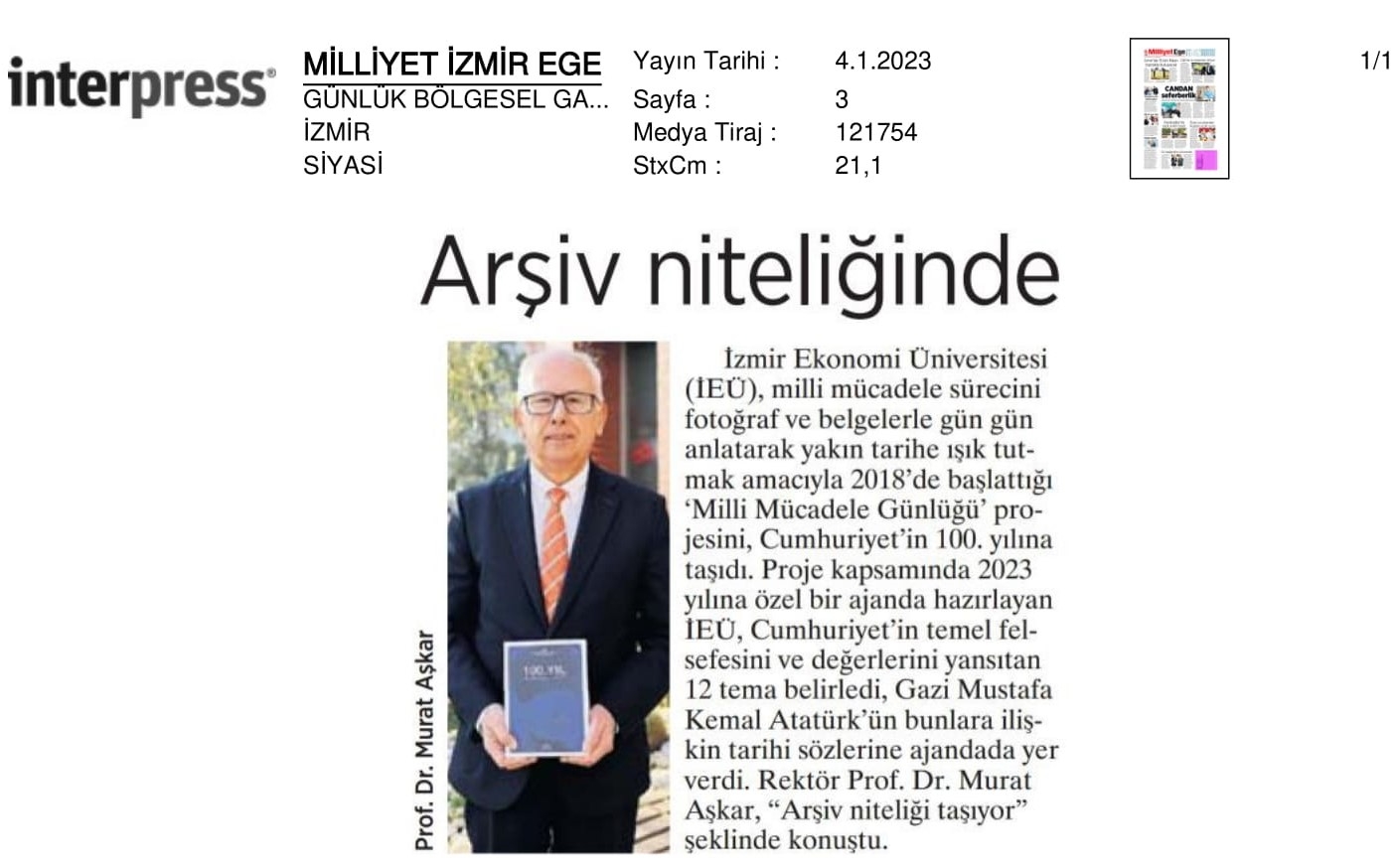 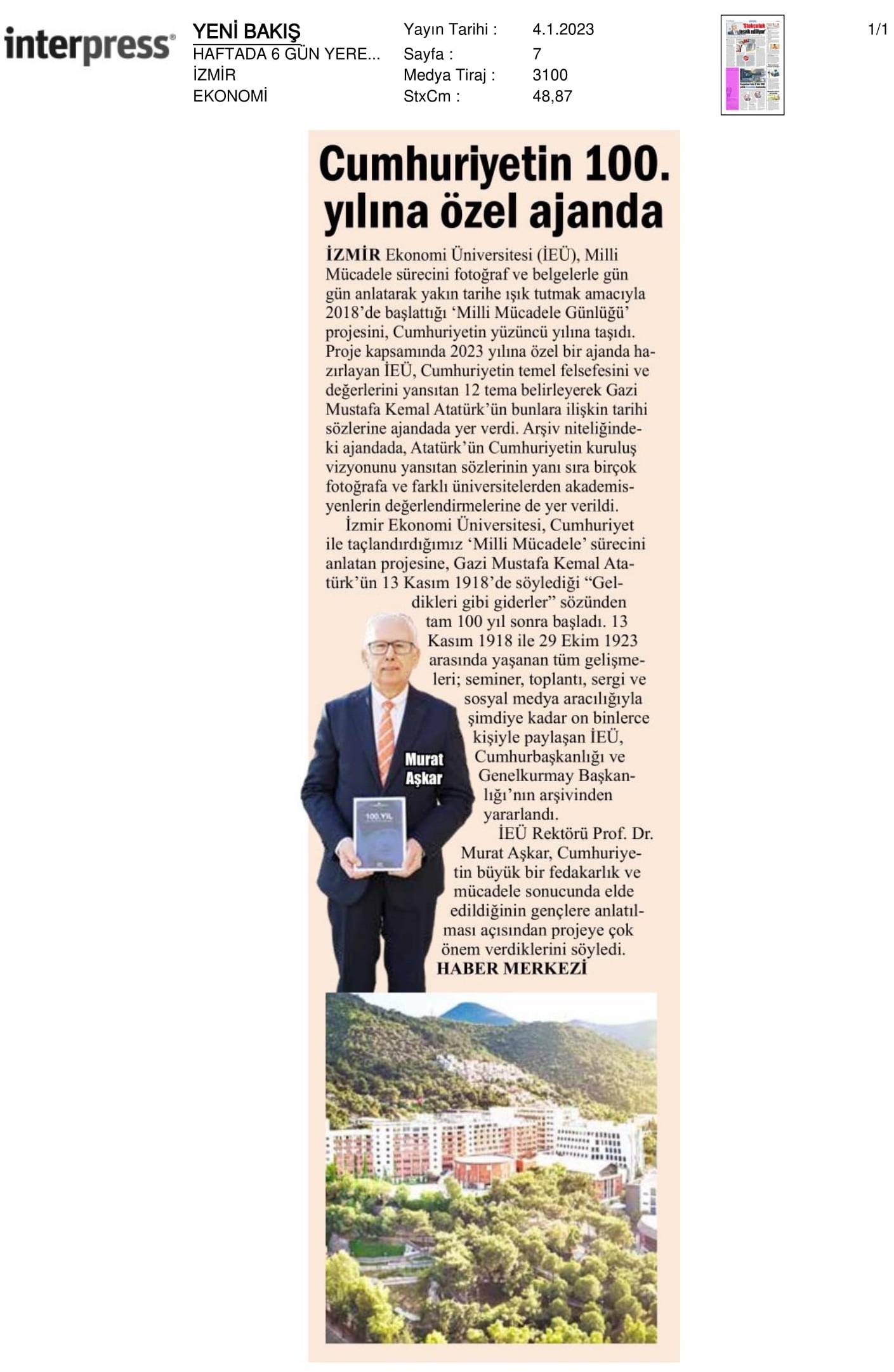 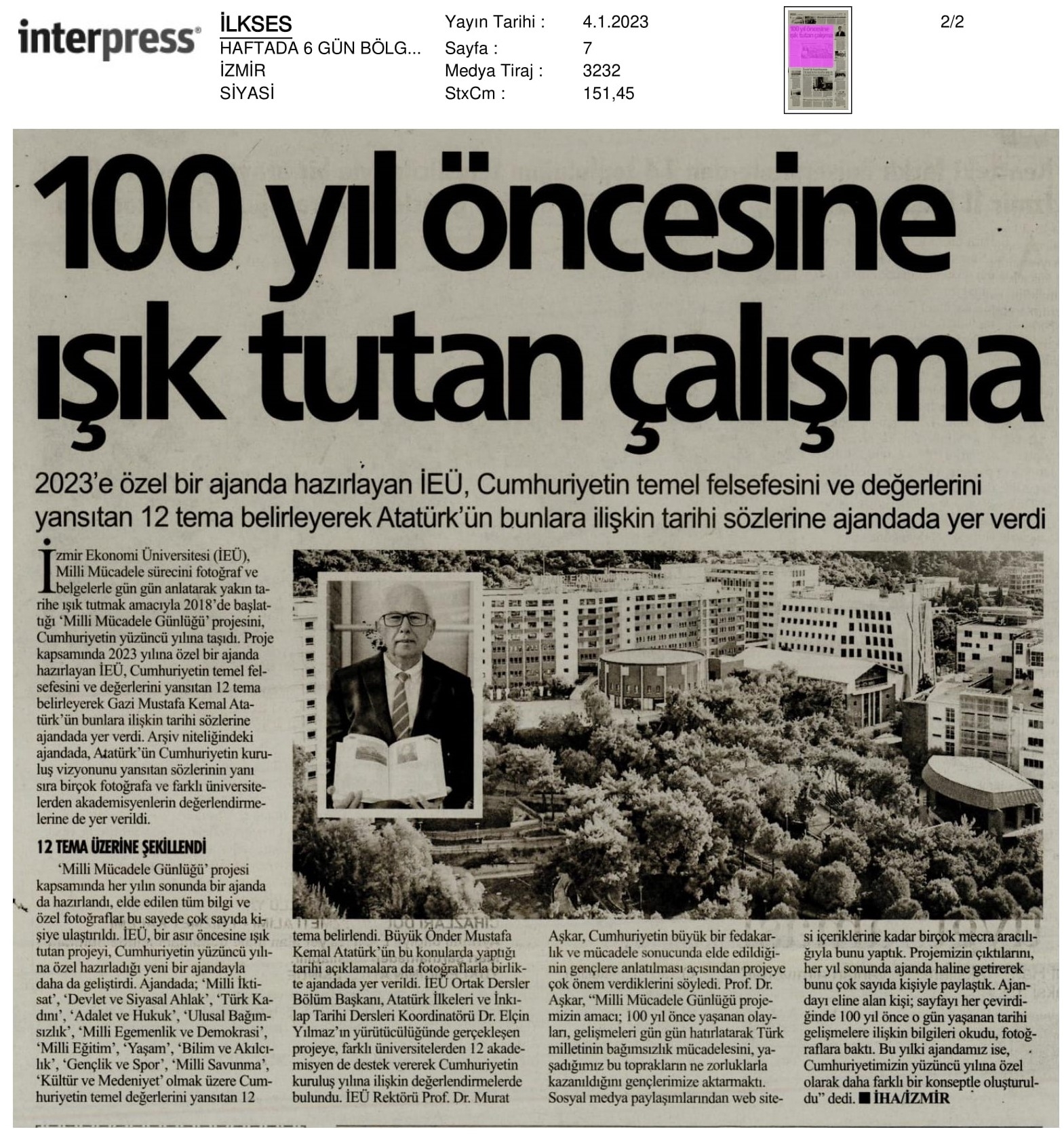