The ‘Güzelbahçe Campus Architectural Project Design Competition’, initiated by Izmir Chamber of Commerce (IZTO) Education and Health Foundation with the aim of bringing a world-class, environmentally friendly and state-of-the-art campus to the city, has been concluded. As a result of a thorough and meticulous examination by a 19-member jury among 52 projects across Turkey, the project headed by Architect Kerim Miskavi was selected as the winner. Mahmut Özgener, President of the Board of Trustees of Izmir University of Economics (IUE), who shared the new campus design by announcing the result of the competition for the first time at the Izmir Chamber of Commerce Education and Health Foundation Board of Trustees Regular Meeting, said, “We see education as a whole, and we want our students to grow up as strong individuals both in social life and in the field of culture and sports. We are aware that this is only possible with a well-equipped campus that can meet all needs. In line with this goal; a selection was made among the projects that adopted a modern, environmentalist, sustainable and state-of-the-art architectural approach, and the work was completed as of June 20. In 3 years, we plan to complete the new campus, where technologies to generate electricity from renewable sources are used in line with our goal of de-carbonization, there are buildings that benefit from energy efficiency practices and whose energy performance is optimized, in-campus transportation is carried out with carbon emission-free vehicles and waste management is provided effectively, and which offers all kinds of opportunities to students with social and sports areas.”

IZTO Education and Health Foundation, the founder of IUE, which is among the leading higher education institutions in Turkey with its approximately 10 thousand students, 20 thousand graduates and more than 800 academics, took action last October to bring a world-class campus to the city. Aiming to offer an environmentalist, sustainable, innovative, economical and modern education base in Güzelbahçe, the Foundation decided to determine the campus design with a national, single-stage competition.

The first announcement of the competition was made on March 10, 2022, after the conditions for the competition were established and the jury was formed. Applications continued until June 7.  52 projects across Turkey were evaluated by the competition jury in 3 stages. As a result of the opinions of the experts, the team, headed by Architect Kerim Miskavi, and members Master Architect Elif Sarpaşar, Master Architect Urban Planner Sabriye Derya Yüce and Landscape Architect Cansu Güreser, was awarded the first prize. The project, prepared by a work group of 14 people, received great acclaim.

Mahmut Özgener, Chairman of Executive Board of IZTO Education and Health Foundation, shared details about the new campus at the 2022 Board of Trustees Regular Meeting held at IUE. Stating that the new campus is of great importance not only for Izmir but also for Turkey, Chairman Özgener said, “When we took office, we talked about a new vision for the University, and we stated that we needed to 'differentiate' when we took into account the point that university education has reached in our country. We see education as a whole with all its elements, and we want our students to grow up as strong individuals both in social life and in the field of culture and sports. When we examine the figures, we see that we have achieved these goals in the eyes of students and parents. The university differentiates itself with its 'dynamism and innovative stance' and this is clearly perceived by the students. We aim to open up new opportunities for our students and academics with a well-equipped campus that can meet all needs.”

Özgener, who shared the process of the Izmir University of Economics Güzelbahçe Campus Competition with the board of trustees, continued as follows: “I would also like to express that we are very pleased with the interest in the competition. At the award ceremony to be held on Friday, July 1, projects will be exhibited and we will present their awards to the projects that ranked high. I would like to thank everyone who contributed to the process of the competition.”

PROF. DR. MURAT AŞKAR: “THE CAMPUS WILL SET AN EXAMPLE TO TURKEY”

Expressing that it was a historic day for both students and educators, IUE Rector, Prof. Dr. Murat Aşkar, said, “The Güzelbahçe campus is a project that we have been working on for a long time and that excites us all. We have made significant progress in a short time and have reached the final stage of laying the foundation of the campus. The campus will offer many opportunities to students both academically and socially. It will pave the way for new successes of the University throughout Turkey. We attach great importance to the social development of young people and to spend their time outside the classroom in the most efficient way as much as academic education. The campus, which will make a difference with its social reinforcement areas, will also set an example to Turkey in this respect. Students studying at our university will feel the privilege of being in such a valuable campus.”

Stating that the competition process is carried out by establishing connections with all academic units and taking the opinions of experts, IUE Güzelbahçe Campus Competition Jury President, Department of Interior Architecture and Environmental Design Lecturer Assoc. Prof. Dr. Emre Ergül said, “The preparation of the competition specifications in accordance with the competition regulations of the Chamber of Architects ensured the confidence and interest of the competitors in this competition.  A very strong team emerged with the main jury members, alternate jury members and advisors. The institution meticulously pulled itself back and formed an advisory board consisting mostly of experts to make an independent and qualified decision. We held serial meetings with jury members. After the site investigation, we determined what kind of priorities should be at the forefront in a university structure. We did not expect a university structure that we see everywhere, so it is more than a 'campus', for us. In the first elimination, approximately 30 projects are eliminated normally, but we were only able to eliminate 3 projects. The eliminations were fierce. The result is pleasing to all of us. I can easily say that the project will be a campus that continues to live with its graduates, will be popular and set an example, and will consolidate itself over time.”

Architect Kerim Miskavi, whose project was awarded the first prize, said, “It is very valuable for us that our project is deemed worthy of the first prize. We were very excited when we saw the competition announcement of Izmir University of Economics. We were very enthusiastic about the idea of a campus that is up-to-date, sustainable, and at the same time loyal to the nature and land it is located in. Making this dream come true was a difficult process. We have done a versatile work with our team for 2 and a half months. We thought long and hard about how we could realize such a qualified campus vision, both in terms of urban, architectural and open spaces, and came up with ideas. It is a great source of pride for us that the resulting project is in line with the imagined campus. We are very excited about the next steps. I am familiar with the Mediterranean geography since I was born and raised in Mersin. I had the opportunity to get to know both Izmir and Güzelbahçe even more deeply with this project.” 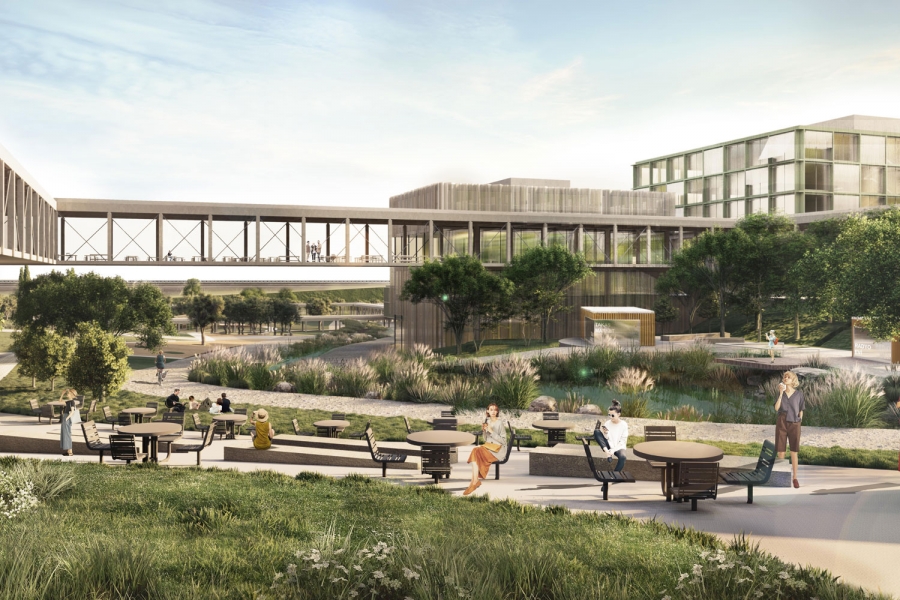 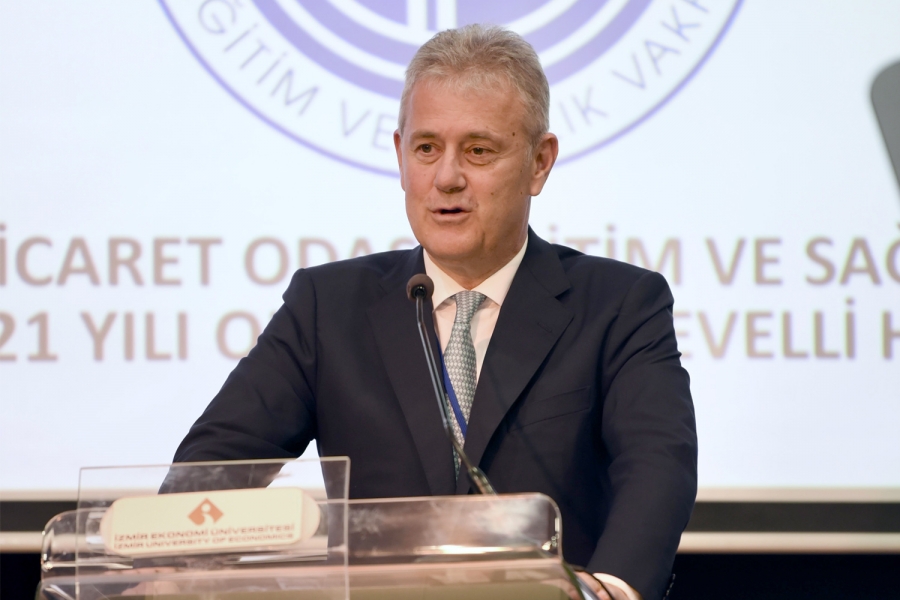 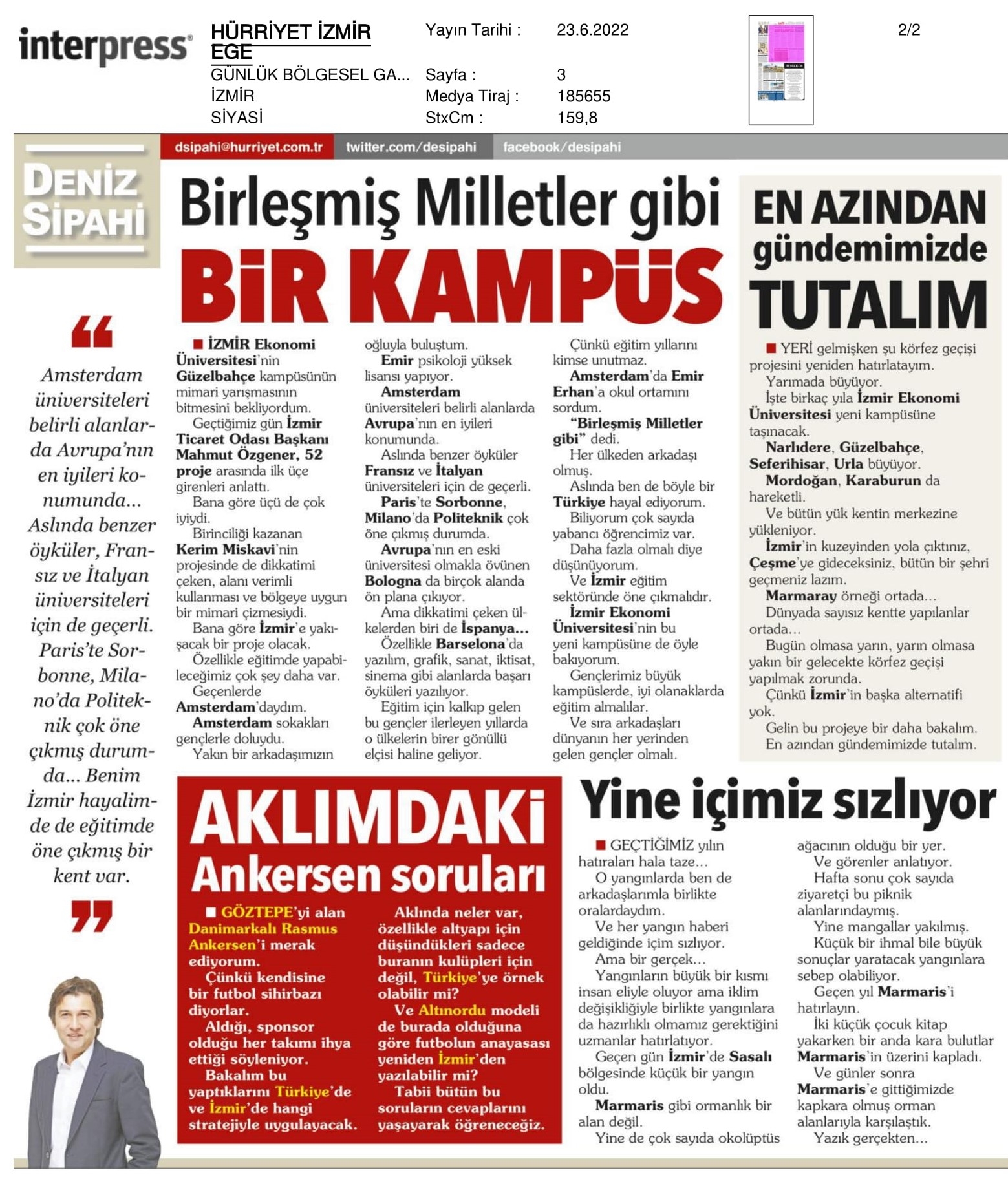 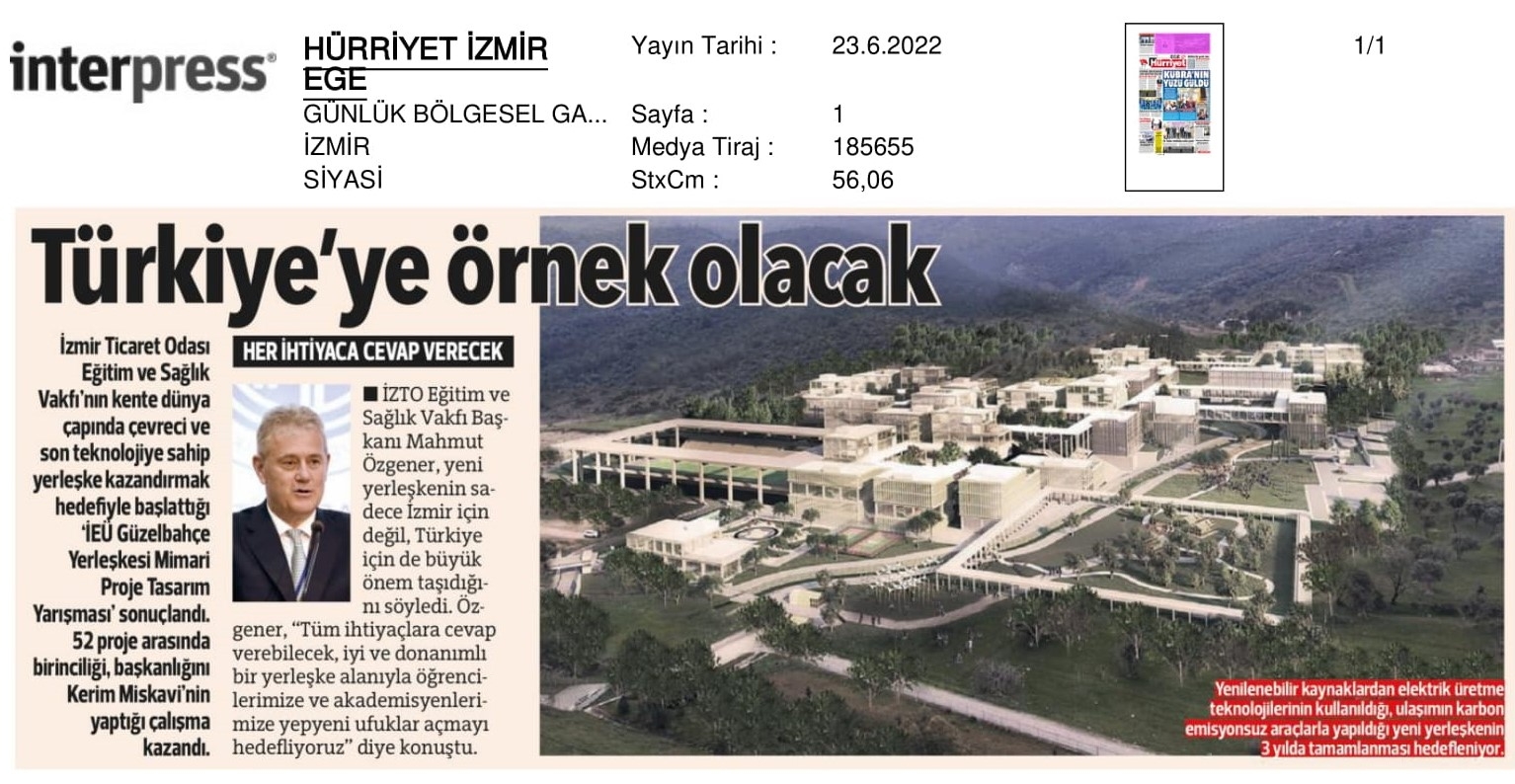 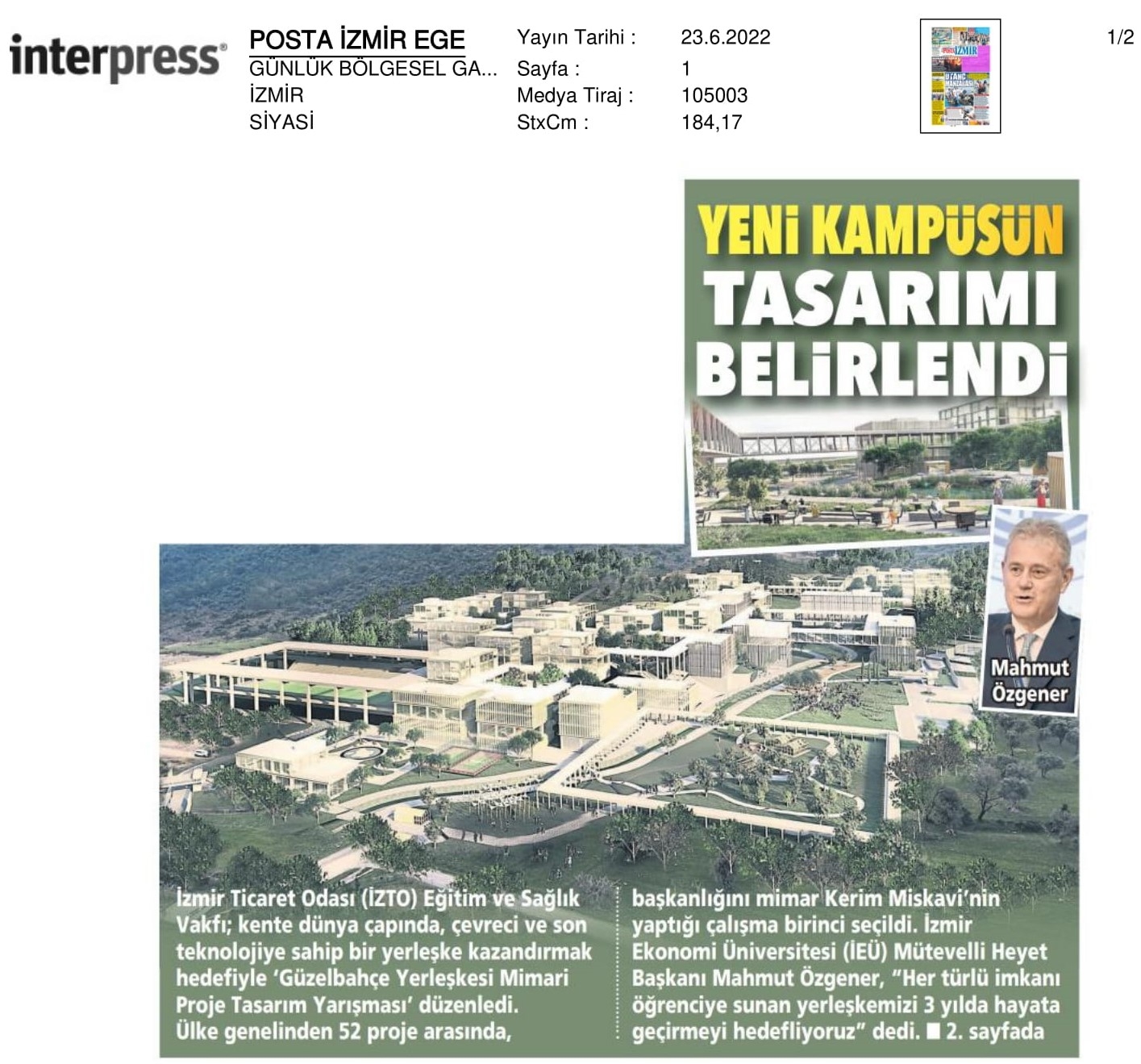 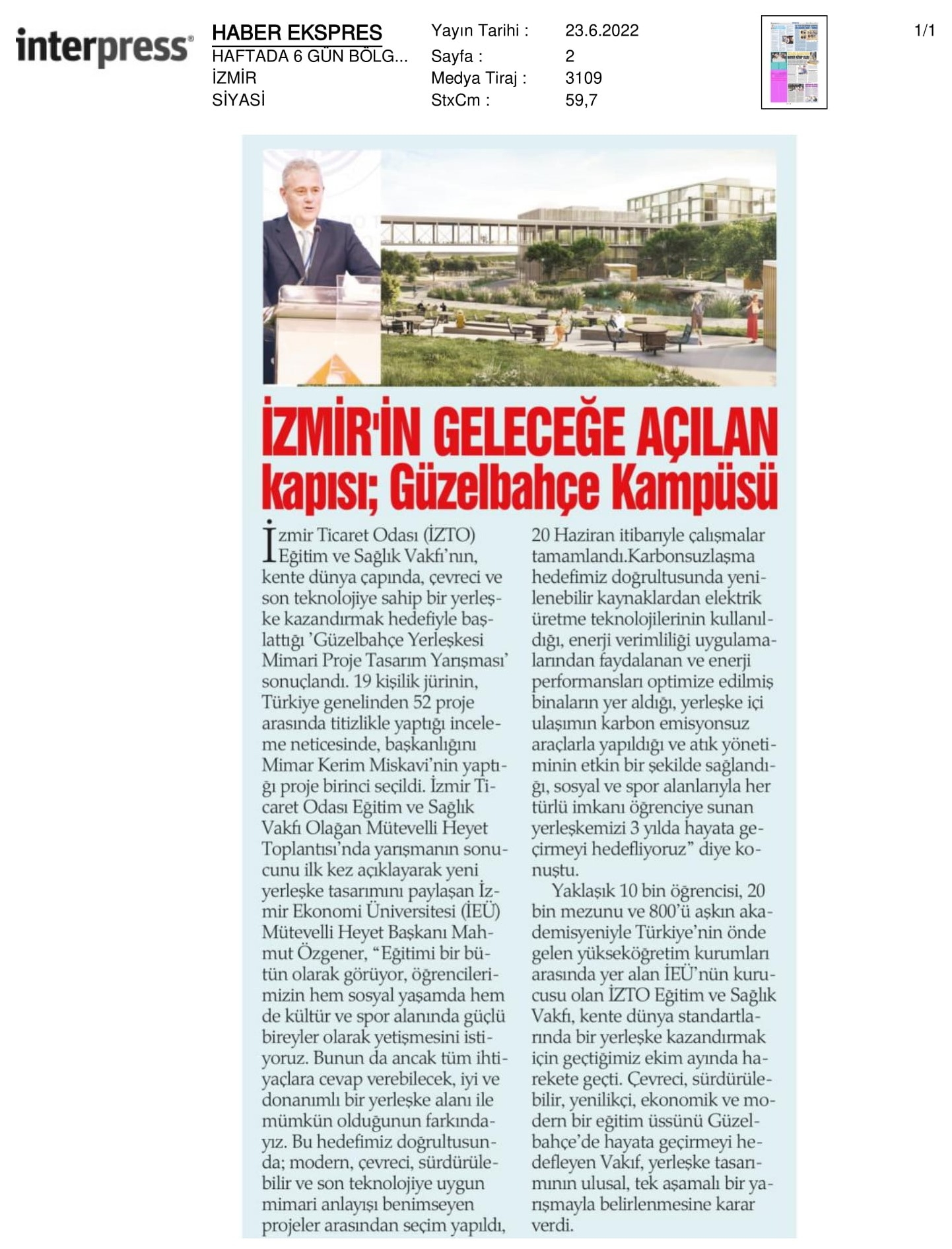 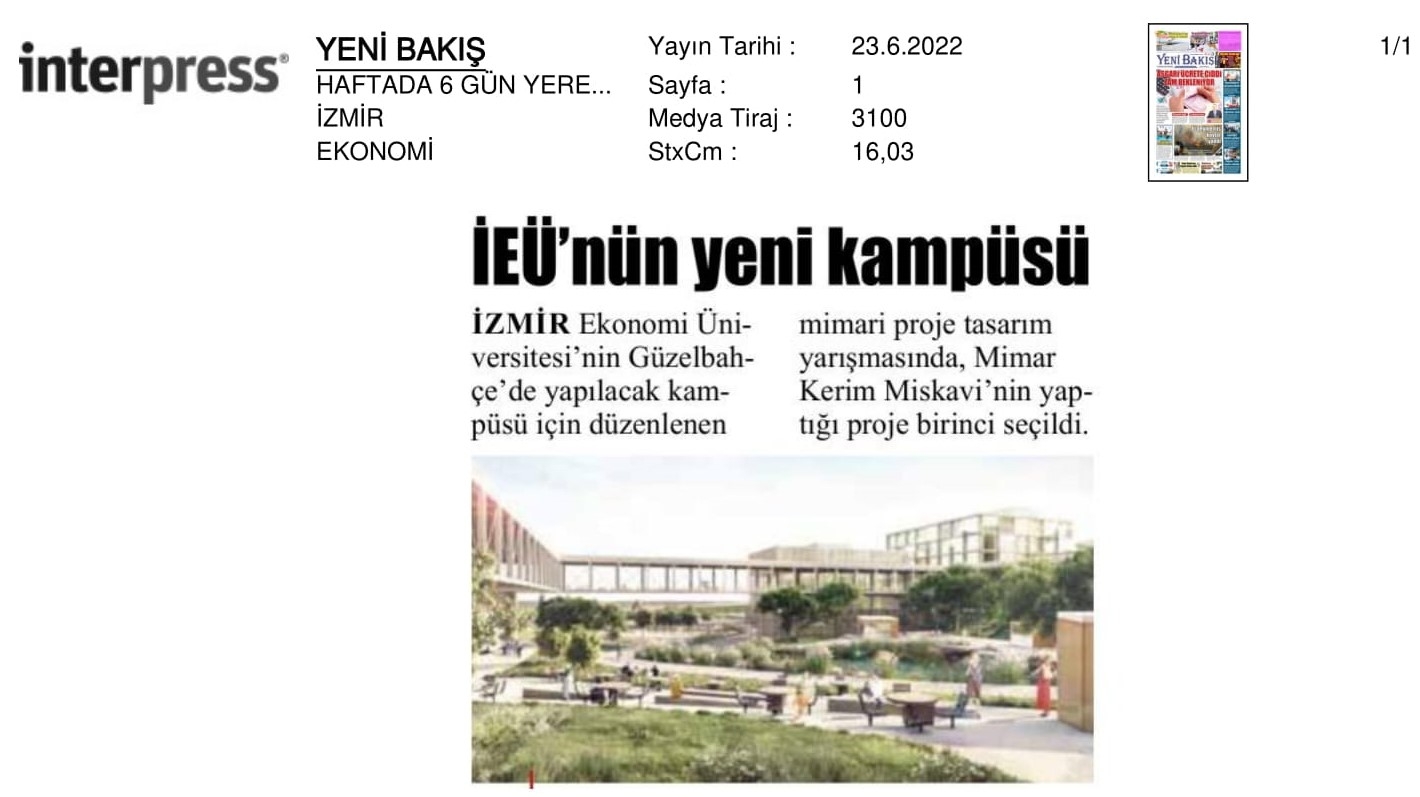 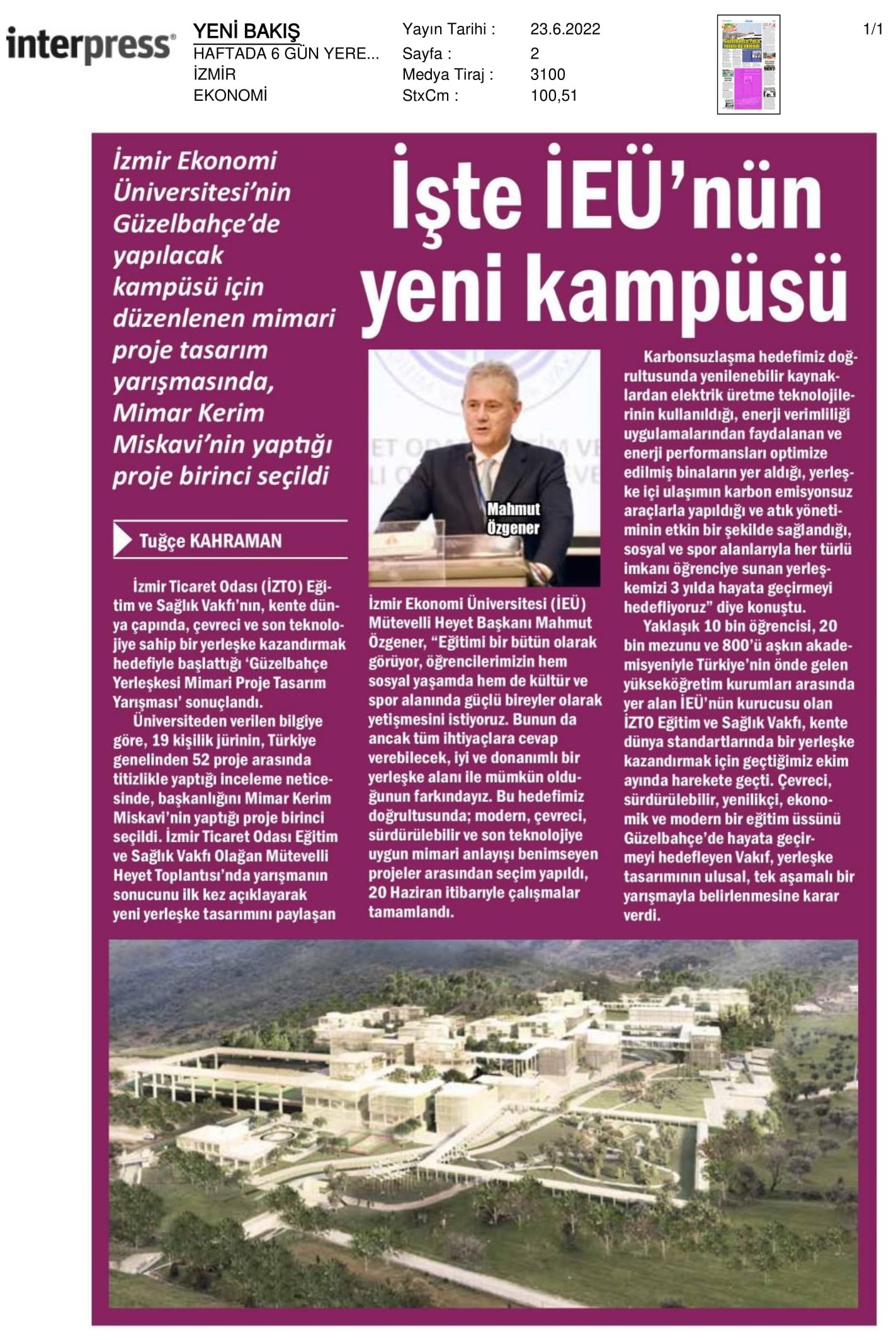 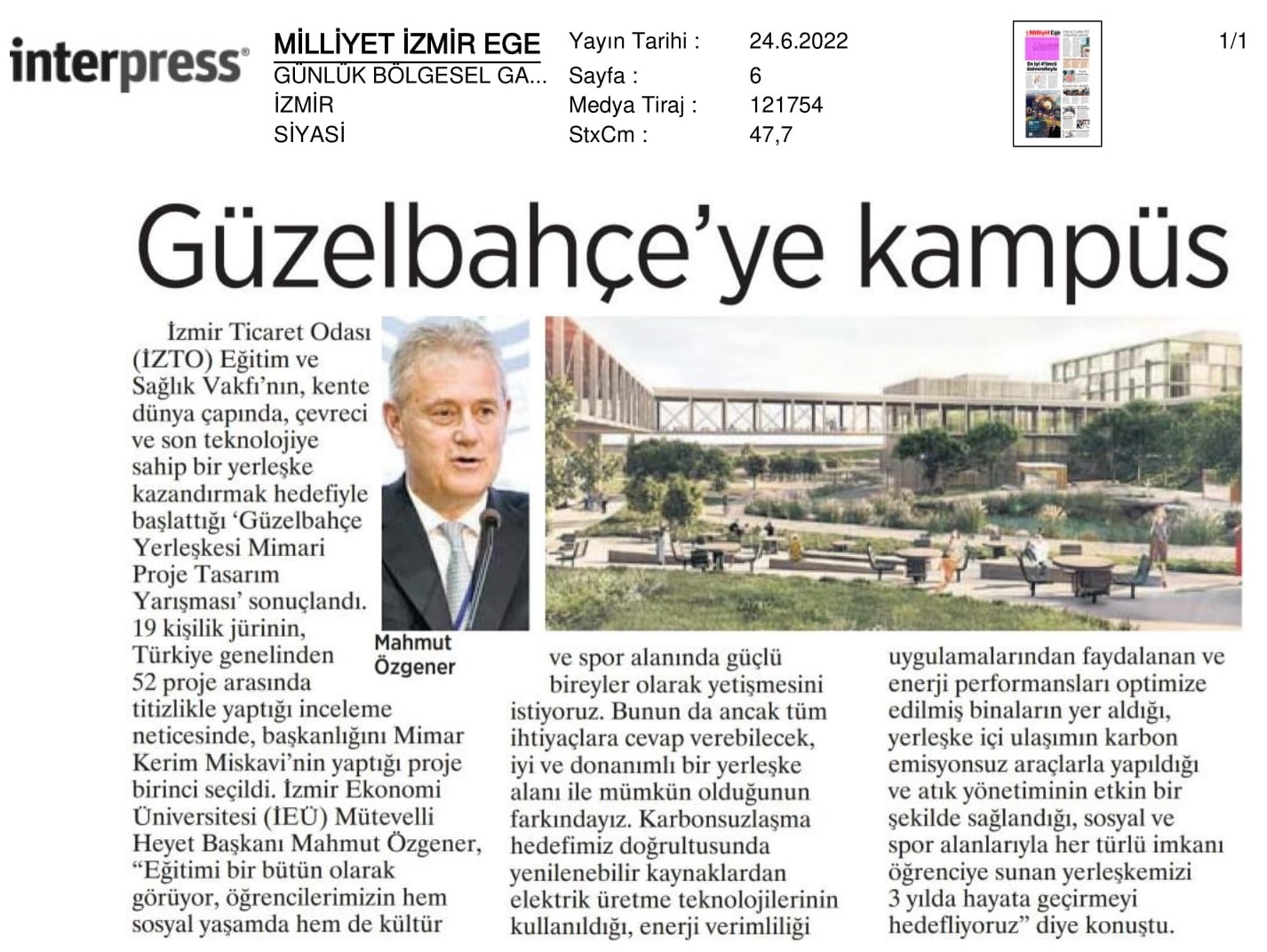 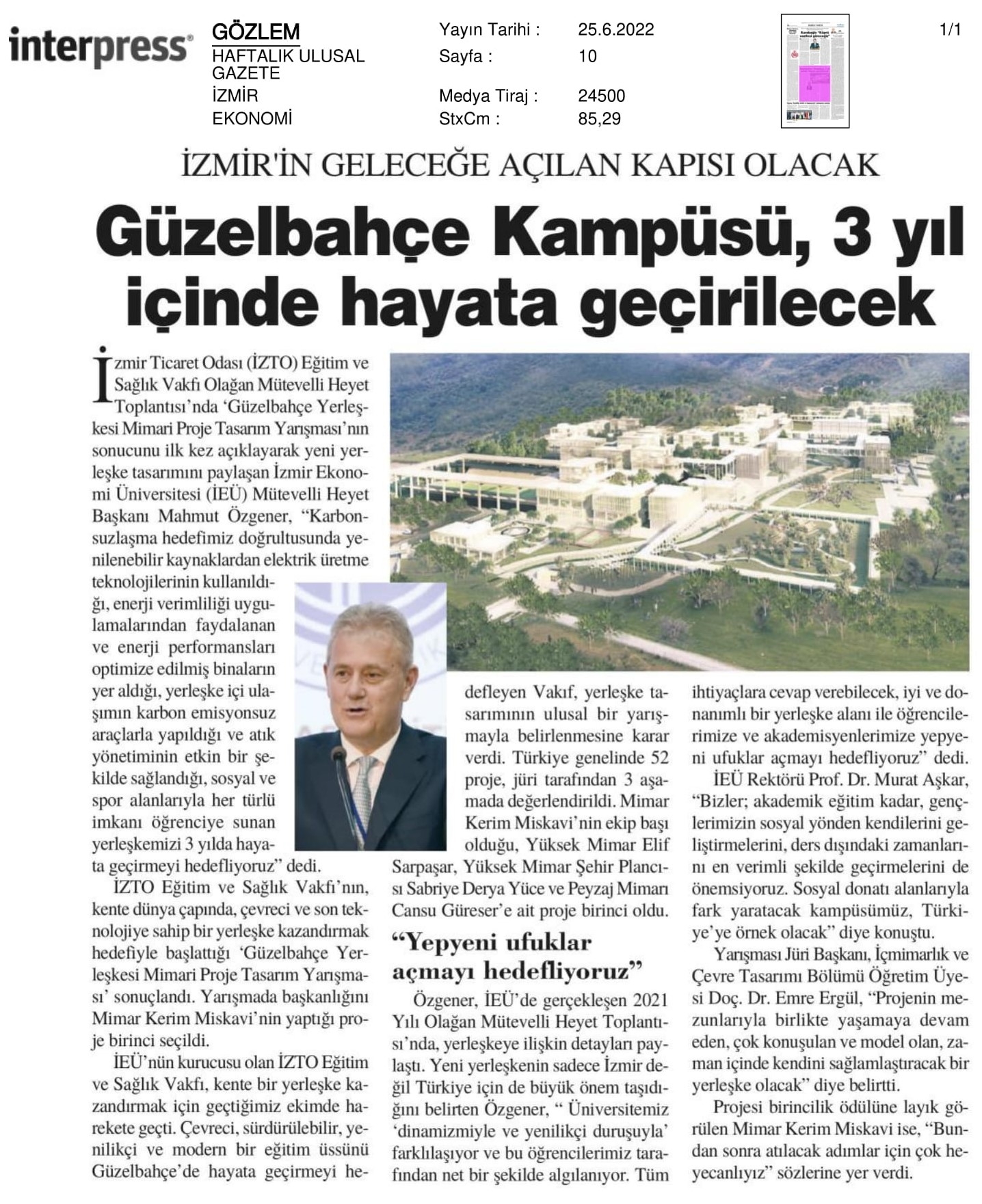 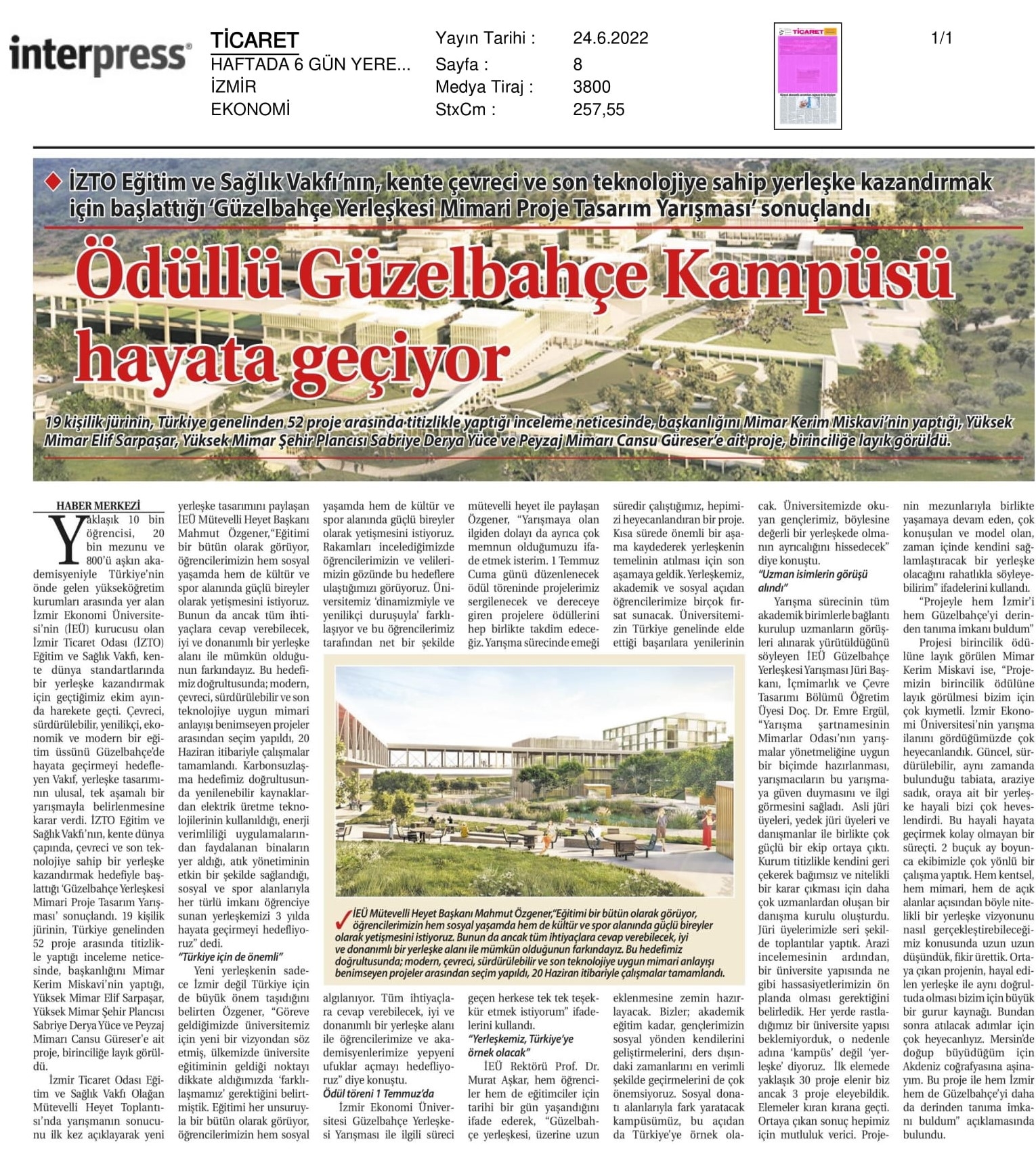